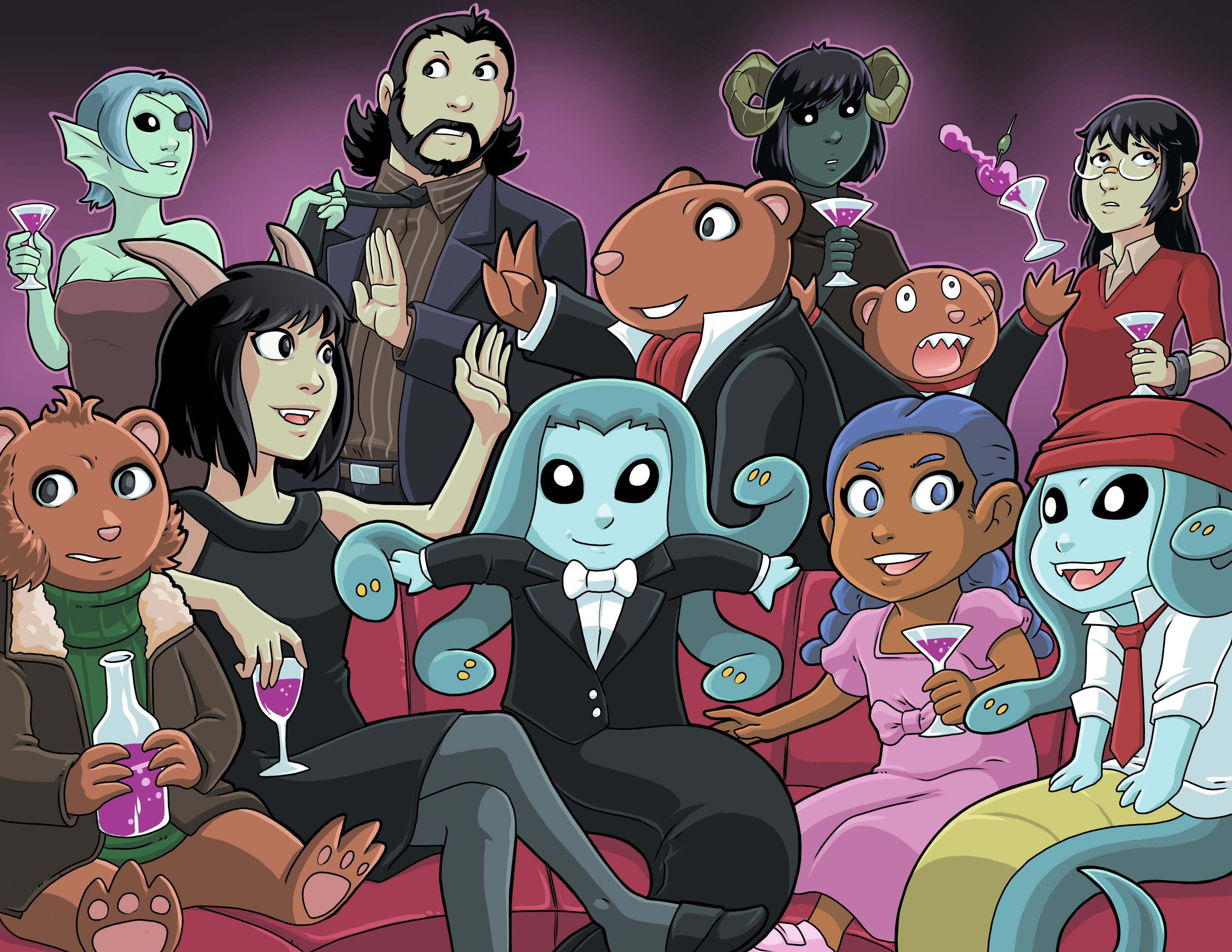 The results are in! Here are the top 10 winners (plus Modest) for this year’s popularity contest. We went for a fancy award’s ceremony after-party vibe for this illustration (I don’t know why I said “we”. I’m the only one here.) The Marah’s, Medusas and Carlos’ were the big winners this year! Lets take a look at the votes:

Marah: Marah managed to grab 1st, 2nd and 4th place! I guess thats what I get for introducing 3 Marahs into the comic! I didn’t think Monster Marah or (especially) NSA Marah were that popular.

Jake: Jake didn’t place in the top 10 last year at all, but managed 3rd place this time! Despite barely being in the comic for over a year. He’s wearing his fancy suit form Season 1 to mark the occasion.

Pirates: Carlos (both) and Roland tied for 6th place. Captain Jaspar didn’t even make the list this time, even though he co-starred in an entire recent season.

Raccoon: The only Medusa sister that made the list. She took the same spot that Glados occupied last year.

I wonder if any of Modest’s classmates will make the list next year?

I’ll be at ECCC this week (see below). because of that I won’t be around to post strips on Friday and Monday. I’m trying to finish up strips before I go so I can post them while I’m gone, but I may not finish them in time. If thats the case I’ll post strips next week instead (probably on Weds). I know strips have been a little sparse for the last month. Between the week I missed earlier this month, the Wolverine Medusa week and this week I haven’t posted strips 3 of the last 8 updates. Things have been a little busy! I’m hoping to return to a more regular schedule in December.

Part of what has kept me so busy is a new set of Modest Medusa marker illustrations for my Patreon backers. Above is one of my favorites from the set. You can check out the whole 36 illustration set on Discord or Facebook. I think you’ll like them! I’ll be at ECCC in Seattle the weekend of December 2-5th. That’s next week! Find me at Artist Alley booth R 11 on floor 6. I’ll have lots of cool Medusa and Yeld stuff, including original art, miniatures, stickers, prints, masks and the very last few Season 1 books. Come find me!