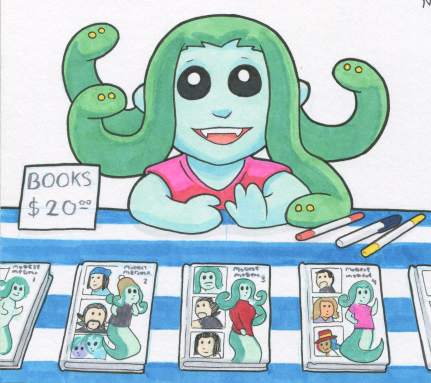 Hi everyone. As most of you probably know, the Modest Medusa Kickstarter ended earlier this week, over funded! Thank you all so much. I really appreciate your support both now and over the last 11 years!

I took a short break on Tuesday (which was nice. I was exhausted) before jumping in to post-Kickstarter related work like talking to the printer, setting up Backerkit and working on book layout. But… I forgot I took Tuesday off, so here I am at the studio at 7am on Friday morning JUST now realizing its Friday and not Thursday! In other words I lost a whole day and didn’t prepare today’s strip! The strip is written, but rather than trying to stay up for another 5-8 hours to draw it I’ve decided to just post a bonus illustration instead, Modest selling books at a convention!

Speaking of conventions, I’ll be in Tacoma, WA for Grit City Comic Show on Sat Oct 22nd (tomorrow). Find me at table 37 with my friend Illya King (of Naked Man Comics).