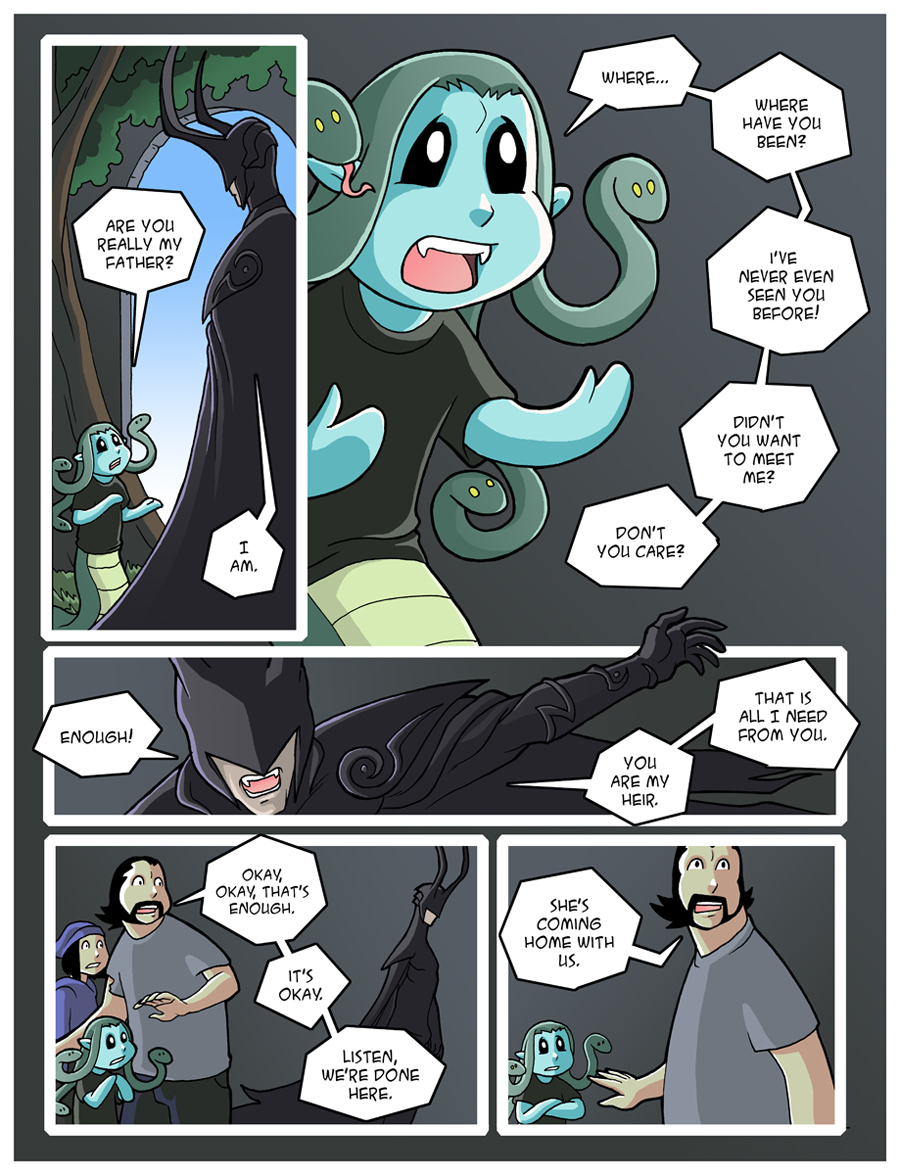 – I meant to have this page up on Friday, but most of last week and weekend I was suffering from horrifying, mind shattering dental pain,a nd all I could do was slowly rock back and forth and watch Nikita. The pain suddenly went away late on Sunday and I managed to finish this page up this morning. I have a dental appointment scheduled for later this month.

– I’ll be at Orycon this coming weekend speaking on some panels. More details later this week.

– Oh, do me a favor and vote for Modest Medusa on Top Web Comics.  Voting just takes a few seconds. We’ve been hovering in the 80’s and 90’s for about a year now, but I’d love to see our rank improve! Thanks!

– I’m going to talk about Age of Ultron, because I just read it and it’s the middle of the night and why the hell not? Warning: Spoilers and profanity! This won’t make any sense if you haven’t read the comic, but if you have…

Age of Ultron starts out so great, and then… what happened? The story falls apart when the Avengers leave the destroyed New York to travel to Nick Fury’s secret base in the Savage Land. But…

1. Luke cage and She Hulk agree to go on a probable suicide mission into the heart of New York to confront Ultron. Cap tells them that after the mission their New York hideout will be exposed, so they should met up… in the Savage Land. But why? None of them know about Fury’s secret base (or if Cap does, he never says so). And how are Luke and She-Hulk supposed to get there? With the world over run by Ultron and everyone hiding in sewers? It’s weird and arbitrary.

2. Luke discovers that the Vision is at the hub of New York, and Ultron is running everything through him. From the future Neat. Except we never come back to this. We never see the vision again, we never find out what happens to him, or how Ultron is using him or where the hell he’s been for years. We don;t know if the Vision is being used, if he’s collaborating or if he;s really been Ultrons puppet all along.

3. Storm flies the rest of the team to the Savage land, which takes days. Fine. When they get there they find a crashed Quinjet Weird. Oh, Luke Cage flew it to the Savage Land. Turns out he was mortally wounded in the fight with Ultron, but escaped and flew to the Savage Land to meet everyone, then waited around a week for them to get there, and then died off camera before anyone can see him. Seriously, we never even see him! So if Luke could fly a plane there, why the hell did the Avengers slowly fly all the way? And why does Luke survive a week and then die the moment everyone shows up?

4. KaZar (white guy lord of the Savage Land) was taking care of Luke (I guess?). Black Widow, Moon Knight and Red Hulk (what?) are also there. Black Widow leads the Avengers to Nick Fury’s secret hideout… which has Nick Fury in it! Apparently he’s just been sitting in his cave for a week while Luke Cage slowly died in the village next door. You’d think Nick could at least step out and say hi to a dying superhero, right?

5. Anyway, good luck Cap told everyone to meet in the Savage Land, because now they can all help Nick with his secret plan to stop Ultron. This involves traveling forward in time to where Ultron is hanging out. And then fighting him. But… if they couldn’t even fight Ultrons drone robots in the current time and got their asses kicked so hard that the entire world was pretty much destroyed, how is taking just six dudes into the future (where, I bet, Ultron has had even longer to secure his shit) going to work out?

6. Someone suggests that a better plan might be to just go back in time and kill Hank Pym, the guy who created Ultron. Sure! Where is that guy anyway? I bet he’d be a good guy to talk to right now? What ever happened to him? Is he dead? Missing? No one ever says. We know at the start of the story, which took place a few months earlier, he was still alive and still an Avenger. But no one even mentions the current Pym. The leading expert on Ultron, the guy who could probably answer a lot of problems… no one ever says “hey lets go find that guy!” they do spend a lot of time arguing whether they should go back in time and kill him though.

7. Anyway, Nick and 5 Avengers go into the future to fight Ultron. They get ambushed by some drones and… we never see them again. It isn’t clear if they’re killed, captured… maybe they retreat? We don’t know. The story never comes back to them. Which is weird, because we just spent 2 issues setting up their mission. Well, whatever.

8. Turns out Wolverine decided to go ahead and go back in time to kill Hank Pym. Sue Storm comes too, just so she can argue and not really do anything. Wolverine shows up to kill Hank and hank is totally like “Who are you?” Which is weird, because I’m pretty sure that Wolverine is an X-Men by that point in time, which makes Hank kind of ridiculously oblivious. But maybe not. Anyway, Wolverine doesn’t bother explaining himself. He just kills Hank. Fine. It’s done. Expect of course it’s not. We get a whole issue and a half where the new timeline that’s created by Pym not being alive involves an ongoing war with Morgan Le Fey, a weird robot version of Tony Stark and a bunch of mashed up X-Men/Avengers calling themselves the Defenders. Ugh. It’s all mindless wankery, especially since we know it doesn’t matter and we’re never going to see it again.

9. Wolverine decides to go back in time and try again,a nd this time he stops his previous self from killing Pym and they talk him into making Ultron… but putting in a virus that will make Ultron suck, but not right away, because Ultron beating the crap out of the Avengers for 30 years is important. So the virus won’t trigger till the beginning of this story, and hank has to make himself forget about it (how?) and… ugh!

10. And then Wolverine one kills (and eats? Maybe?) Wolverine 2. Becasue I guess there can only be one Wolverine.

11.And then everything is fine, and Thor just hits Ultron. Why the fuck couldn’t he do that before?

12. Oh, except it’s not fine! Turns out that Wolverine running around in the past made time/space all shitty, and now the Ultimate Universe and… some Universe drawn by Alex Maleev?… and some other stuff… is all combining or messed up or something? But don’t explain that at all! Because now the story is over! I mean, the story doesn;’t end. There’s no ending. We never find out what actually happened! It’s just over. Like they ran out of pages!

13. Oh, except they didn’t run out of pages, because here’s another whole issue about Hank Pym running around being a superhero and feeling bad about creating Ultron. But when does it take place? Before the rest of the story? During? After?

This series started out so strong, but after just 3 issues it crashed sooooooo bad! Guess what? Bryan Hitch, who did such great work illustrating the first few issues, suddenly disappeared at the exact same time as the story went bad. To be replaced by Brandon Peterson, who is really fucking awful. I don’t know what awful computer program he uses to produce his art, but he should really, really stop. He’s not a good illustrator anyway, but he was better when he was actually drawing things by hand.