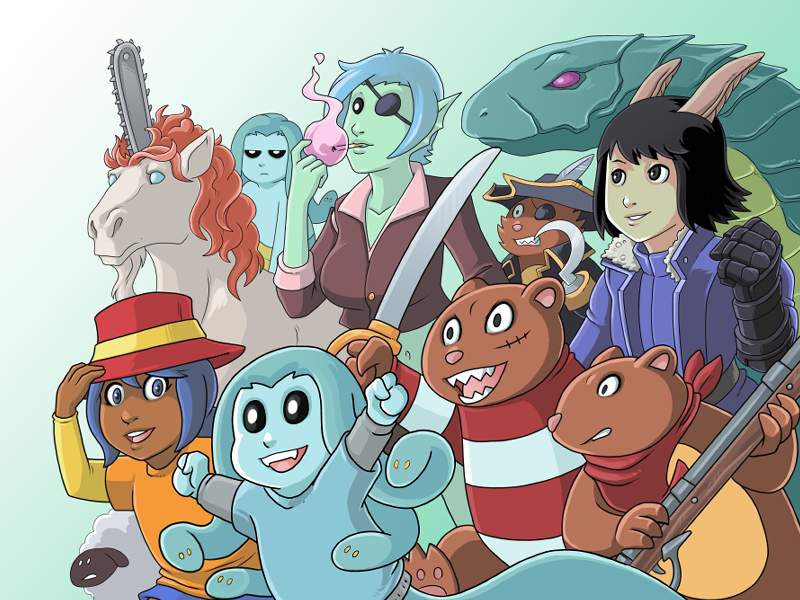 Posted In: comic
Last month I asked Modest Medusa readers to pick their top 10 favorite characters (not counting Modest, because we all knew she’d win in a landslide). The results were a mix of predictable and surprising! Here’s the official 2020 Top 10 pinup! I’m looking forward to this becoming a yearly tradition! Here’s the official rankings:
0. Modest Medusa
1. Marah (No real surprise. Marah has always been a favorite)
2. Jenny the Mermaid (A big surprise! People always tell me they hate Jenny!)
3. Chainsaw Unicorn (We haven’t seen him for years, but he’s still a favorite!)
4. Carlos (Carlos has been a favorite since his first appearance in season 2)
5. The other Carlos (slightly less popular than his friend)
6. Ekans (Modest’s best friend wasn’t well-liked when she first showed up, but I guess that’s changed!)
7. Captain Jaspar (Jaspar didn’t even have a name until recently!)
8. Glados Medusa (Another surprise! the squinty sister has become everyone’s favorite member of Modest’s family!) 9. Aunty Naga (Way more popular than her sister)
10. Sheep (I don’t know what it means that random sheep made the top 10) 11. Science (another Medusa sister. I didn’t think she was that popular) 12. Jake (couldn’t even make the top 10 in his own comic) 13. T-Shirt Medusa (The obscure mystery medusa who only shows up to hawk shirts) 14. Deb the Mermaid (Jenny’s evil sister or best friend or girlfriend?)
15. Sarah (Charles’ mysterious wife who won’t allow Modest in her living space)
16. Ecksbocks (The biggest little sister. I though she’d be more popular)
17. Urano (He’s been dead for years, but people still love the first Oathbreaker)
18. Raccoon (the stabbiest Medusa!)
19. The Gorgon (at least a few of you love Medusa’s cannibal mom)
20. Ms. Booth (Modest’s teacher was so hated at one point that some of you stopped reading the comic)
21. Charles (somehow less popular than Ms. Booth) 22. Hole (My favorite Medusa sister)
23. Shut Up (The toughest Medusa sister is somehow the least favorite!) 24. Shin the Shepherd (less popular than his own sheep)
25. Prince Dragul (the least popular character on our poll. But some of you still love him! Write in : Sandy the Mermaid (the yellow mermaid barmaid. We’ve seen her exactly once)